Support Program of Dharma and Martia, (subdivision of RFSL in Stockholm Sweden) for The Orlando victims.

This Program was held in Segels Torg in Stockholm Sweden on 14th of July.

The Swedish Prime Minister, officials of US embassy in Sweden as well as and  RSFL president condemned the brutal attack at Orlando’s Pulse Gay nightclub.

Despite all years of working on LGBT rights and fight against homophobia globally,  we still face such tragic events

The purpose of these events by The Dharma And Martia group was to convey a powerful message to all communities that LGBT rights are human rights which means all individuals should be granted with their basic rights, and not be subjected to threats and coercion and Lawlessness.

Love is the only request of any human beings that he or she should have the ability to express or show it to anyone without fear or suffocation.

and struggle for freedom and equality.

We demand equal rights for LGBTI persons, right to live and right to love.

After the speech by Swedish Prime Minister, the last message was stated in public by Director of Dharma and Martya Mrs. Nadia Zabehi in English. She as well, condomned this horrific attack and ended her remark by the peom of Saadi:

Human beings are members of a whole,

In creation of one essence and soul.

If one member is afflicted with pain, Other members uneasy will remain.

If you have no sympathy for human pain, The name of human you cannot retain. 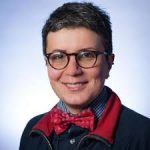 IDAHOT 2016 was a Day to Remember in Stockholm!

Buy me a coffee